DHS’s Cheryl Fuentes Honored as Ally In Prevention
Cheryl Fuentes passed away Sept. 4, 2018. DHS will miss her greatly and sends condolences to her family and friends. In April, she was awarded the 2018 Ally in Prevention Award by Stop Child Abuse Now (SCAN) of Northern Virginia. Cheryl managed Project Family at DHS and improved the lives of Arlington families for more than 25 years. She implemented the County’s Parent Education Program and led the formation of the Arlington Parent Education Network. She helped spearhead the popular “Your Child’s Development Resource and Information Fair” for Arlington families and she created ArlingtonFamilies.com, a comprehensive and easy-to-navigate collection of resources for parents and families. (Sept 2018)

DHS’s Siobhan Grayson Receives Volunteer Arlington Award
Siobhan was recognized at the Arlington Cares event for her support of the County’s Teen Network Board, and inspiring youth to take on leadership roles on a wide variety of typically adult commissions and committees. TNB 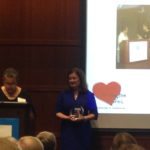 members also help in the planning of community events like the Martin Luther King, Jr., celebration. The TNB has explored having a youth seat on the School and/or County Boards. Siobhan’s passion for youth and their well-being extends beyond the typical student you might see on a committee like TNB. She works with foster care and Court involved youth as well, to cultivate their potential and help them to see their value in our community. (July 2018)

Arlington’s Park System Ranked Among Nation’s Best
When it comes to public park systems, Arlington’s ranks near the top of the nation’s 100 largest cities. That’s according to the Trust for Public Land’s ParkScore® index, which recently ranked the County fourth on its list. Neighboring Washington, DC ranked third, with Minneapolis edging out neighboring Saint Paul for the top spot. (May 2016)

Arlington’s Plan to End Homelessness Recognized
The 2012 National Conference on Ending Homelessness recognized the County’s successful efforts to house the chronically homeless. The County’s ongoing drive to house the vulnerable, chronically homeless members of the community is part of Arlington’s 10 Year Plan to End Homelessness and includes the ongoing 100 Homes Campaign. Through 100 Homes, Arlington has surveyed 218 homeless individuals, identifying 113 as “vulnerable,” or at high risk of dying on the streets. Since launching 100 Homes in the fall of 2011, Arlington has housed 30 of these vulnerable individuals. (July 2012)